An authentic cadence is a V-I progression in which both the V and I  chords are in root possion.[1]Steven G. Laitz, The Complete Musician: An Integrated Approach to Theory, Analysis and Listening (4th Ed (New York [etc.]: Oxford University Press, 2016), 172

An evaded cadence occurs when there is a cadential progression up to the dominant but after the dominant there is no resolution to the tonic but something else happens which has a feeling of belonging to the material to come and not as a closure of that which has been.[2]William E. Caplin, Classical Form: A Theory of Formal Functions for the Instrumental Music of Haydn, Mozart and Beethoven (New York [ect.]: Oxford University Press, 1998), 101-106.

An instance of modal mixture in which the root of the chord is altered. So for instance if in the major mode the chord on the sixth scale degree (which would be minor) is changed to a major chord by lowering the 6, but also the 3.

An instance of modal mixture in which the quality of the chord is altered but not its root. So for instance if in the major mode the chord on the fourth scale degree (which would be major) is changed to a minor chord by lowering the 6.

More often this is called a deceptive cadential progression. It occurs when a authentic cadential progression does not end with a tonic but with a related harmony. Most often this is a chord with the sixth scale degree in the bass (typically vi). [3]William E. Caplin, Classical Form: A Theory of Formal Functions for the Instrumental Music of Haydn, Mozart and Beethoven (New York [ect.]: Oxford University Press, 1998), 19.

The Fauxbourdon originates from the middle of the fifteenth century. Hymns originally contained only two voices, a cantus firmus and a lower voice, the tenor, which was sung a sixth or an octave lower. To this was added a middle voice a fourth lower than the cantus. The fourth was also called wrong or faulty fifth. Faulty is faux in French and fifth is bourdon, thus explaining the name Fauxbourdon. In this way a 6/3 or 8/3 chord is created. Over time the term Fauxbourdon got to be used for a succession of 6/3 chords. The nice thing about this is that these chords can be used to create a sequence without having the problem of parallel fifths or octaves.[4] Job IJzerman, Harmony, Counterpoint, Partimento: A New Method Inspired by Old Masters (New York [ect.]: Oxford University Press, 2018), 29-33.

The medial caesura (MC) is the pauze or break in all voices that often occurs between the end of the transition and the beginning of the second tonal area. In fact it divides the exposition in two parts: the part of the home key (first tonal area) and the part of the secondary key (second tonal area). In major this is often the dominant of the home key, in minor it is often the mediant.

The adjective medial is added because the caesura often occurs half way the exposition; however Hepokoski and Darcy show that (taking into account various options for the cadence preceding the MC) the MC occurs somewhere between 15 and 70% of the exposition.[5]Hepokoski, James A, and Warren Darcy. Elements of Sonata Theory: Norms, Types, and Deformations in the Late-Eighteenth-Century Sonata  (New York [etc.]: Oxford University Press, 2006), 37.

The break need not be in all voices. If one (or two) voices still contain some notes as bridging material this is called a caesura fill (CF).[6]Hepokoski and Darcy. Elements of Sonata Theory, 40.

A technique in which harmonies are borrowed from the relative mode. An example is the Picardy third where a piece in a minor mode ends with a major chord. More common are instances in which elements of the minor mode are imported in the major mode. This is also called Moll-Dur: a lowered (minor) note in a major context. Often used is a lowered sixth in a predominant chord (ii0, iv or VI). When for instance the sixth in a predominant IV is altered it will be notated as: ivMD.

Tonicization is the experience of another key then the tonic for a certain brief amount of time (ranging from a few beats up to a few bars). A tonicization typically consists of an applied dominant and optionally before that a predominant of the foreign key, and then a statement of the foreign key itself.[7]Steven G. Laitz, The Complete Musician: An Integrated Approach to Theory, Analysis and Listening (4th Ed (New York [etc.]: Oxford University Press, 2016), 467-468.

A full cadential progression consists of the following harmonies:

This is also called the phrase model.[8]Laitz, The Complete Musician, 273-277.
In the PD phase the following chords are possible:

In the Dominant phase the following chords are possible (among others like diminished seventh chords):

The D64  chord stands for: Dominant six-four chord and is in fact a I64 chord.

The following notations are used for this cadential structure:

The function of the I64 (or D64) chord is in fact a suspension for the dominant chord to come, hence the last notation form in the example.[9]Laitz, The Complete Musician, 308-311. 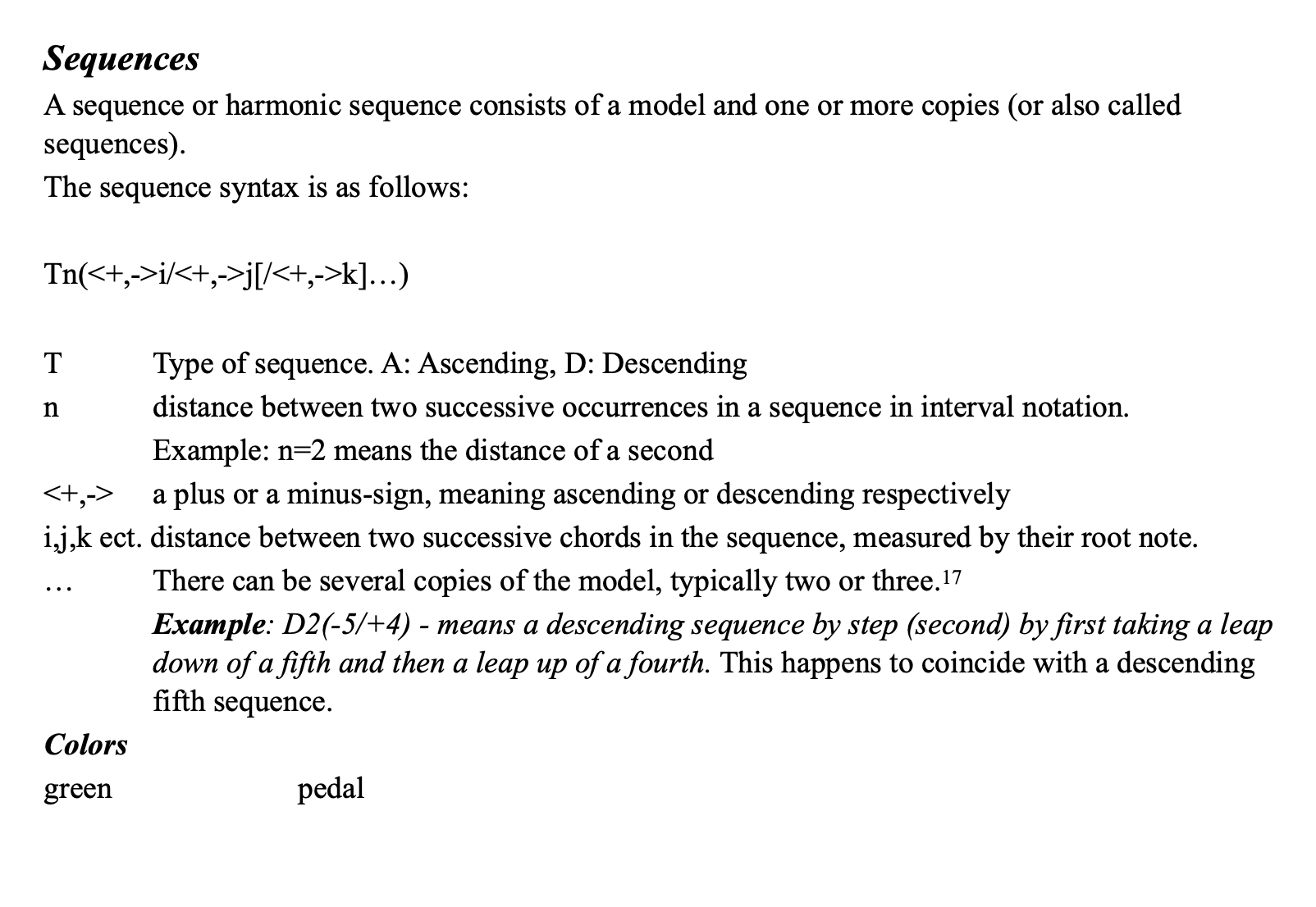